We value the wonderful and creative power of play here at The Writing Center. We’ve just added these cute little classic games to our workspaces here at the center. Come play!

Back in my day (I’m currently 27, but that’s like 256 in video game years) playing a video game with a story meant a lot of reading. Like, a novel’s worth.

When I was little, I would read books, but I would also play Chrono Trigger, and those were very similar actions, as far as I was concerned. Chrono Trigger required a little more active thought, but they were of roughly equal literary value (I still feel that way, though the writing in some of those 90’s-era RPGs was a bit hokey). 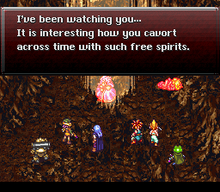 But in the last decade, playing a game with a storyline has become a lot more like watching a movie. There are cutscenes that James Cameron would be proud of, skillfully written plot arcs, and voice work by actual real people. At one point, voice acting meant having something to listen to while you read the dialog box in major events. Game development companies lacked the means or the desire to fully voice a game, so you’d get a few lines with highly compressed audio wherever the developers felt like it.

Today, voice acting in video games is so prevalent, that what was once known as the “text box” is now known as “subtitles.” And their default setting when you start the game is “off.”

I don’t particularly wish to make a value judgement on whether that’s a good or bad thing in terms of the literary value of modern video games, but it does present a new challenge for those who create narratives in the digital age:

Voice acting is a thing. In the same way bad acting can throw off the impact of a good movie, bad voice acting can ruin a well-written story. The delivery is every bit as important as the composition itself. END_OF_DOCUMENT_TOKEN_TO_BE_REPLACED

If you’ve been into The Writing Center here at MSU, you’ll hear us talk an awful lot about “voice.” How do you create a unique voice? How do you maintain it? Why in the world does it matter?

The short answer is that the voice you use changes the way you connect with your audience.

Sometimes it’s something as simple as the difference between saying, “I saw some kinda eagle the other day” to your friends, or, “I suddenly spotted a majestic winged creature approximately forty-eight hours ago,” in a paper to a writing instructor you’re trying to impress with your eloquence (this usually doesn’t actually work, for the record). In a newspaper, it shows up as “A red-tailed hawk was observed Monday afternoon.”

All say the same things, but differently, and to different people. They sound different, because those lines have the same information with different goals. The first is about starting conversation, the second about sounding cool, the third about impartially relaying information.

The point? The voice you use in writing has to correspond with the purpose you’re trying to achieve. Perhaps the best recent example of this is a game called Bastion.

END_OF_DOCUMENT_TOKEN_TO_BE_REPLACED

Sometimes, in fiction writing, you have a really good idea for a certain type of character, but you’re not sure what story to put him in.

Sometimes, you have a good idea for a story, but struggle with building a character.

Sometimes you want to share that idea with the world and tell your character’s story, but you don’t have the slightest idea how to start. In fact, that’s probably most of the time.

When I’m faced with a situation like that, I put my character through something like a stress test. That is to say, I’ll put said character through a number of unusual scenarios to see how they act. In other words, I role-play them.

The amount of choice given to players in modern role-playing games (RPGs) is ever-increasing, chiefly because the point of playing them is the ability to, you know, role play. Historically, video game RPGs have considered “role playing” as basically stepping into the role of a pre-fabricated character and playing through his/her story. And your story-building options are twofold: win, or lose. END_OF_DOCUMENT_TOKEN_TO_BE_REPLACED

In most video games or digital narratives, the story is provided to you as part of the experience. Some games, like Dys4ia, are specifically geared toward telling a story as their entire purpose.

But in some cases, you only have the digital environment to work with, and often, that environment gives you only a context, and no particular narrative.

This is where a lot of classic game stories come from. For instance:

And, um… save the princess!

END_OF_DOCUMENT_TOKEN_TO_BE_REPLACED

Let me start off here with a disclaimer.

Our topic of discussion this week is a game that deals with some potentially uncomfortable personal stuff. It deals with bodies, and body parts, and gender perceptions, and it does all of this in a pretty mature (as in not for kids) way. That’s in terms of some of the visuals but also the language used. So consider the “NSFW” tag applied.

That said, Dys4ia is a successful art game because  it discusses these issues openly and honestly, without being squeamish. More on that shortly. END_OF_DOCUMENT_TOKEN_TO_BE_REPLACED

You don’t know me (yet), but here are some things you need to know about me: I love creative writing, I love reading, and I rarely pick up a book for fun.

Yes, you read that correctly. I didn’t read Harry Potter or the Lord of the Rings after their second books. I didn’t read the Hunger Games at all. And I haven’t touched Dickens or many of the classic pieces of fiction that are so often considered exemplary in the field of creative writing. For that matter, I didn’t watch their movies, either. Yet I love reading. I love storytelling, and I actually do, professionally, a form of creative non-fiction writing.

END_OF_DOCUMENT_TOKEN_TO_BE_REPLACED

You may have noticed our new pens in the Writing Center, and perhaps even wondered what this “20/20” thing is all about. This year is the Writing Center’s 20th anniversary, and we are celebrating with 20 events throughout this academic year. Don’t worry, perfect vision is not required. All are welcome!

Our first event is on August 18th from 3-6pm, behind Bessey Hall – our 20th Anniversary Kickoff Party! We are starting off our celebration in the best way possible – with a bounce house, games, raffles, and of course, food! There will also be a scavenger hunt, a photo booth, crafts, and much more!

Don’t miss out on the fun, and you may even go home with a gift card, t-shirt, or tickets to a show!

Check out the schedule of events for the whole year. We hope to see you throughout our celebration this year, and of course we are always here to help you at Bessey Hall or one of our many satellites!